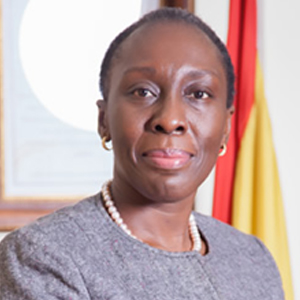 Marietta Brew Appiah-Opong is the Managing Partner of the firm. She holds an LLB from the University of Ghana and was called to the Ghana Bar in 1994. She also holds a graduate diploma in Law and Development from the Institute of Social Studies, Netherlands. Marietta joined Lithur Brew & Company in 2000 as a shareholder/director. An experienced litigator, her expertise includes, but is not limited to, commercial law, transactions and general corporate advice. After 19 years of legal practice, she was appointed and acted as Attorney General and Minister of Justice of the Republic of Ghana from February 2013 until her tenure ended in January 2017. She returns to the firm with a wealth of experience and deep understanding of public institutions and their workings. As Attorney General and Minister of Justice, she was the Legal Advisor to the Government of Ghana and represented the Presidency, the country, and its ministries and agencies in all major transactions. In litigation she appeared before the highest courts in the country and major international tribunals such as the Permanent Court of Arbitration (PCA), the International Court of Arbitration of the International Chamber of Commerce (ICC) and the International Tribunal for the Law of the Sea (ITLOS). As a member of the General Legal Council, she had a key voice in legal training and professional discipline. In her capacity as the Minister for Justice, she managed Government's legal response to all issues, oversaw drafting and the presentation of legislation to the Parliament of the Republic of Ghana, and supervised the general administration of the justice ministry with quiet distinction.