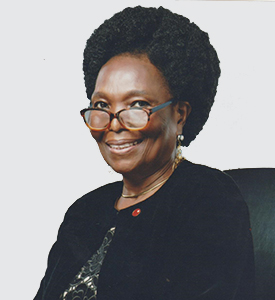 Dr (Mrs.) Omolara Ololade Akanji retired from the Central Bank of Nigeria in 2007 as the Director Trade and Exchange Department. She is currently an Independent Director on the Board of Sterling Bank Plc and M Kudi, a subsidiary of Interswitch Nigeria.

3. The Role of Micro, Small and Medium Enterprises (MSMEs) In Nigeria Economic Development being the paper presented at the Institute of Certified Economist July 9, 2010.

5. Oil and Gas Management in Nigeria: Lessons for Ghana being a paper presented at the induction course for the Chartered Institute of Economist, Ghana during December 3, 2010. Published in the Central Bank of Nigeria, Bullion Volume 34, No 4; October- December, 2010.

6. Leadership and Institutional Development being a paper published in the Vol. 3 No 2 2012 edition of the Human Resource Management Journal.

7. Design, Implications and Analysis of Household Surveys: A Practical Issues to note being a paper published in the Central Bank of Nigeria, Bullion Volume 37, No 3: July-September, 2013

Since retirement from the service of the Central Bank of Nigeria, she has engaged in consulting/training on finance and trade finance matters. She has held the following position:

(i) Vice-Chairman, Banking Commission of the ICCN, 2012 to date.

Dr (Mrs.) Omolara Ololade Akanji is a graduate of Agricultural Economics (BSc) University of Ibadan (1973); University of Reading, Berkshire England (1976); University of Canterbury, Kent, School of Mathematics (1986) and European American University (EAU) Commonwealth of Dominica (2011). She has Certification in Financial Programming from the IMF Institute, Washington (2001); Certificate in Monetary Policy Management, Harvard School of Government (2001). She has attended several Harvard Business School Executive Programs from 2002 to 2019 ranging from Negotiation, Compensation, Board Leadership, and the Ministerial World Trade facilitation.

She was awarded by the Pope Dame of St. Sylvester (DSS) of the Catholic Church in March, 2020.

When not engaged in Board matters and Training, Dr (Mrs.) Omolara Ololade Akanji engages in reading and creative writing and working on her Foundation for Widows named Marycare Foundation. She is very engaged with the financial monitoring of the Catholic Bishop Conference of Nigeria (CBCN) agencies.
0